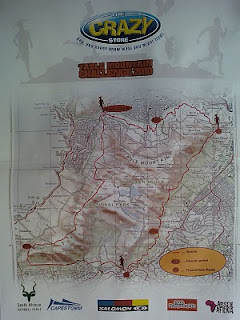 Held together by not more than a couple of pieces of tape I lined up for the Crazy Table Mountain Challenge a 35 km race on the mountain trails and paths around the famous landmark. The racing relay teams had set off at 07H00 and then 10 minutes later I set off with the fast individuals. I think the start times stretched back to 08H00. But I was long gone chasing the lead pack; consisting of a skinny black guy, Alan, the little white guy in a S.A. flag vest, a tall triathlon and Bruce almighty (last year’s winner). If I was looking for a win, there was only Bruce standing in the way, but I was only hoping to make it back in one piece.

After the rolling hills of the face of Table Mountain I saw Bruce and the tri-athlete reach the end of leg 1 ahead of me. The other two were long gone. Leg 2 would take me along the contour path to the Nek. Both Bruce and the tri-athlete had disappeared – Bruce had sped off and the tri-athlete had stopped (I didn’t know his fate). The contour path wasn’t empty as I headed to the Nek I was catching the slower racing teams. It was nice to be catching and not being caught. I won’t say I was flying but I was still moving forwards. The thought of running over the aloes on my way through Kirstenbosch never even entered my mind. At the top I passed a ‘little’ girl from a relay team and then there in front of me was the skinny black guy….he wasn’t a trail runner and I passed him at Skeleton Gorge as the trail got technical.

At this stage I should stop and tell you; that as good a job as the tape on my calf was doing, it was only holding my calf together so the rest of my body was getting ready to fall apart (okay maybe that’s not quite right) but my quads were working overtime without pay and you all know what happens when you force someone to work overtime without pay….

I finished leg 2 about 3 minutes off the pace and after an equipment check I was on my way again. The 3rd leg is more than just the 3rd leg, this is where the race is won or lost. Bruce made his move and so did I, Bruce went hunting for a second win and I fell to pieces!!! This stage is divided up into different sections: 1st one took me to the style over the fence, didn’t lose anytime till the steep climb before the fence. This wasn’t a good sign, but I was only worried about my calf and it was holding out. 2nd section starts with a climb through a forest before a left takes you along a contour to the turn at Hout Bay Corner my split time of 19,41 was under 20 mins so this was still on track and I was still in 3rd place. The 3rd section takes you up, up and more up to the fence and the left hand turn to the long road to Kasteels. This is where I knew my game was over, my Chicken was cooked, Elvis had left the building. On the first up I was slow the steps all seemed bigger than I remembered and my pack was getting heavier and heavier with every step I took. (Normally my pack gets lighter as I drink the water, but today I think some-one was busy filling it with lead.) I wasn’t hanging around, but my steps were slow and I could feel the pack of youngsters chasing me down. I made it to the ridge and tried to run the few meters to the next climb… Ha Ha Ha
My arms were still strong so climbing was easy, but the traverse around to Llandudno Corner was slow and as I started the final pitch I could see the pack closing in for the kill!!! I tell you these youngsters showed me no respected (mental note, get fit and kick their butts next race) as I was left standing on the side of the mountain… Then wait for it they still had the cheek to ask me if they were heading the right way. I should have let them head on straight at the fence, instead of turning them left on the long flat road to Kasteels. 32:23, that is slow I was 26:26 a couple of weeks ago on a slow training run.
OK, the long flat road to Kasteels is nether flat or a road; it’s an undulating single track that is almost only used by trail runners. This is the 4th section and should take 45min, but as Leo had now past me I know it would take me closer to an hour. The back table is great to be running on as it climbs over half the Apostles. At Grootkop I looked back and saw a young lady and a guy catching me, I want to say: “so I upped to pace and left them in my dust” but I could do none of that. I did try to hold them at bay by weaving through the fynbos and breakneck speed, but I had no speed and it was only me that was broken…
We did play a bit of cat and mouse as I would get away on the very technical stuff and they would catch me when I had to walk. They were quite a bit ahead come the “cliff” again I should have kept quiet, but I ordered them over the top and off the edge. All that said I still past both of them. My lead was short lived as I was walking again up the next hill. This was the last I saw of them as they powered up the hill and disappeared over the top. I broke an hour to Kasteels, but that wasn’t all that was broken.
My Quads were shattered and now I had to deal with the 5th section, down to the Pipe Track. Each step down was like birth contractions, but “Pain is Temporary, Glory is for Ever” so with the help of gravity I made it down. (16:42 not to slow, only 2 or 3 min off the pace) With only 4km of Pipe Track to go I was almost finished. It’s a good thing the Pipe Track is as flat as it is, because on the one climb I just stopped and looked at the steps that lay ahead of me wondering how I was going to make it up.

It had been a hard day on the Mountain, but I had finished in a respectable time of 4h18 7th finisher and 2nd vet.
Posted by coach dion at 7:36 AM