ANOTHER WEEKEND OF RACES

Dawn had seen that the Napier Half was on this weekend, so after deciding that her foot would hold out (she has a bruised heel and too much tar isn't good for her) we woke early and drove the 2 hours to the little town of Napier. Now we last ran this race 10 years ago in 2001. Back then she ran a 93min !!! while I had run 77:34. A couple of years earlier I had run a 74:15 coming 4th in the race, and if I can remember we won the team prize great fun back then.

Bring on 2011 and to start with the skinny fast guys took us round the track before heading out on to the route. (add 300m to the course) We started at the school and headed down the hill, the front guys were gunning it and I was left with 2 other 40+ guys in about 15th place. After 2 fast km the road became flat as we headed out of town on a gravel road. I was now on my own counting the km down. Just before 16km to go the 10km guys started coming back and I moved up the placings. Problem was I had no idea how many guys had turned. It wasn't till about 8km that a marshal told me I was 4th... Do you know what that means? I had to race, and try to catch 3rd. I took a split 70 sec and set about upping my tempo, I closed the gap a bit, but it wasn't till the hills in the 2nd half that I made any real inroads into his lead over me. All to soon the hills were over and I might have caught 35sec, but I wasn't going to finish the job of catching him... I finished in 4th with a time of 80:20. (Mr. Garmin called the race 21.7km so it was a little long)
It had been a beautiful day out there and waiting for prise giving was OK as (why didn't I take pictures) there were plenty of country stalls selling stuff and the time flew by.

Sunday was a different story:
A cold front had rolled in and winter was back!!! Again I was up early and off to a race, but this was a trail race on the front slopes of Table Mountain. I run and done well in this race a number of times, but today I was just going to use it as a Sunday long run. I still wanted to support the race and the Volunteer Wildfire fighters.

Trail runners are tough and we started in the wind and rain while it was still dark... (all of this on a trail) A couple of guys took off and I was not chasing this year, so I just ran at my own pace I was in 6th place when Carl caught me and from then on the 2 of us ran together. In the latter stages of the race he got a bit tired so I pulled ahead and ran in on my own. I don't really know how it happened, but I ended up 3rd!!! I think a couple of guys had ether fallen out or ran a couple of extra kms!!! never mind I'll take third. 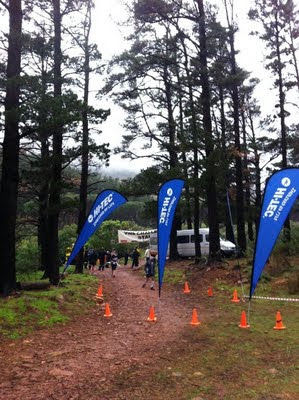 Only one picture for you guys, this is the finish...
Posted by coach dion at 1:31 PM