HEADING FOR THE MOUNTAINS

Saturday we again packed our bags and boarded a Swiss train but this time we were headed for the mountains, we did a detour via The Gruyeres to see a castle and taste cheese and a big pity as we ran out of time to get to the famous Calliers chocolate factory.

Onto our home for the next 8 days,- Grachen, a little mountain village in the Matterhorn valley. 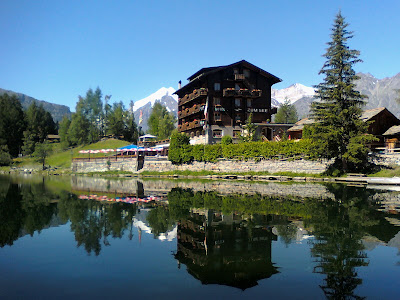 Dawn slept like the dead and I didn’t wake her, so by the time we got up we were running late and didn’t have much time to run before breakfast, 45mins would have to do. Hanningalp looked like a nice place to run to so I set off up the road (Dawn didn’t like that idea of going up). Mr Garmin gave me the first km split, 7:59, the 2ndwas even worse 8:44….things weren’t going well. The body didn’t really like running at 1736m or was it the fact that I had climbed 400m in 2,5km…probably not the right way to start any run, from Hanningalp I turned right to Stafel 2206m before looking for a single track to come down. The hills here are evil and the mountains big….more on that in a moment. It was a Sunday and in these little towns everything closes so we just walked around and planned our week.

With the weather nice on Monday we put in another 45minute run before breakfast at 08h00 and headed up the valley to Zermatt. 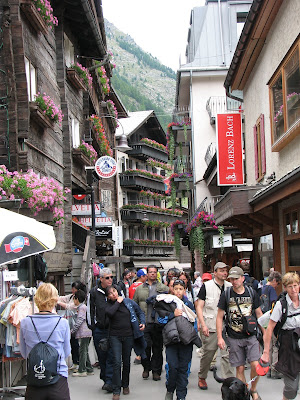 Zermatt rocks summer, winter anytime and why wouldn’t it, the Matterhorn stands guard over the little town inviting people in. 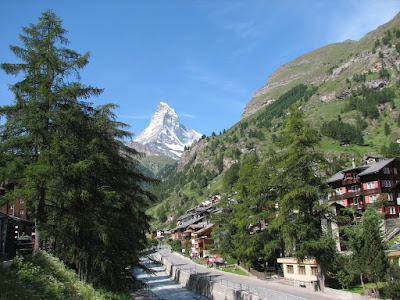 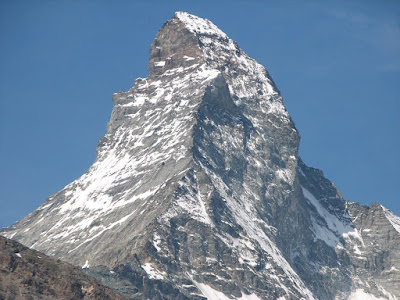 After a slow walk through the town we ended up at the cable station! Destination up, and up, and up, final resting place the Klein Matterhorn, 3838m. 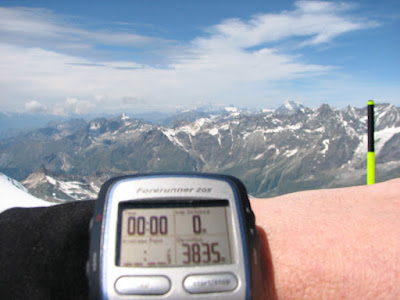 With the temperature down in the valley in the high 20’s and not a cloud in the sky it is hard to believe that the snow up here never melts and the people ski all year round. Ski-ing was not on our agenda (or in our budget) we were up here to take in the views, the Matterhorn 4478m to the right, the Breithorn 4164m to the left and Italy straight ahead. (Not to mention the other 5 4000+m peaks, told you the mountains here were big)

It looks so easy so why not, lots of other people were on the trail up the Breithorn so why not me. 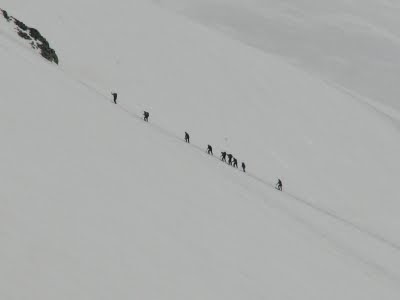 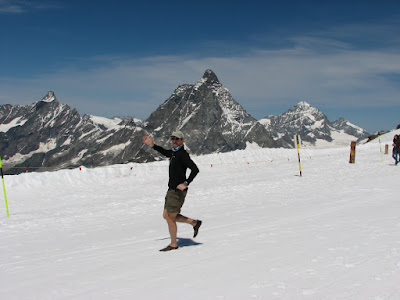 Okay they were dressed in boots, crampons and snowgear, yes they were also in groups and roped together so what was stopping me in shorts, a warm top and five fingers? (just a note here the snow outside the cable station was compact and the five fingers were working really well on it) I left Dawn behind and set off. Now its flattish between the mountains (Klein Matterhorn and Breithorn) so running along the snow tracks I soon overheated and took off my jacket. Now I’m not one to be stupid and as much as I wanted to run up to 4000m I knew it wasn’t a good idea so with the weather closing in and over a km of snow running at 3800m behind me I turned back at the start of the climb (2.5kms in 15.44m) (Dawn was getting worried).

With the mountain behind us we joined the hustle and bustle of the tourists in the town, souvenir and chocolate hunting before taking the train and bus back to Grachen. The next couple of days were spent walking in and around Grachen, mostly on the contours through the forest on the side of the mountain.

Registration for the marathon opened on Thursday afternoon at St Niklaus so after lunch we took the bus down there. Registration was a low key affair with not much happening and after a short walk through town we headed up the mountain to our B&B.

Bring on the race...