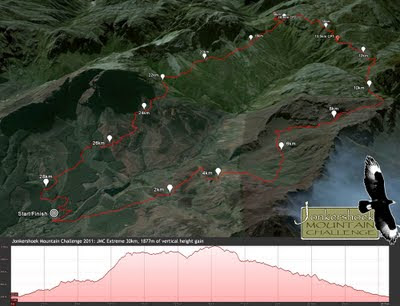 Jonkershoek Mountain Challenge was run on Sunday 21 August 2011 and I should have stayed in bed... I didn't so here I am to tell you about the race.

From the day I heard about this race I was in... words like Mountain, Extreme, 30km and Challenge had court my eye. (and there was money up for grabs, which was reachable.)

Things were going well in training and after last weeks CCC result I know my running was were I wanted it. Role on Sunday... Then come Monday (T minus 6 days and counting) I was told I had to be at Head Office on Friday, so I was flying up to Pretoria on Thursday! Problem? Yes, No, Maybe... I took the week really easy till Thursday and then it was time off. This was good. But it looks like I caught something on the plane or just from traveling...

I tried to fight it with Vitamin C, but it was a losing battle. Yes Cape Town is in the middle of winter, but the sun has been out most days and boy it's been great. But great winter weather can only last so long!!! and it turned over night!!! The clouds had rolled in and the heavens had opened.

Now I woke up feeling even worse than I had done going to bed feeling, so I just rolled over and went back to bed. (Like I would tell any of my athletes.) Wrong, I was up at 05h00 and out the door at 05h30 on my way to Jonkershoek.

An extreme race in extreme weather, I had to be there. After my kit was checked I got ready to run... (Compulsory Equipment... yes compulsory equipment, stuff like a first-aid kit fleece and a rain jacket)

At the start it was perfect running weather, for a road race: light drizzle and very little wind, but we weren't running on the road, we were heading up the mountain!

The race started slowly and I took the pace, for about 500m till Allan decided it was time to race. I went with the front guys and soon 4 of us had a nice lead. We were still on the gravel road and the climb was easy. I was hoping that I wasn't really sick and I would be able to run... I lasted 10min and then had to wish them well as they kept the pace. I stopped running hard and settled into a light jog. I was still in 4th as we left the 'road' and hit the single track up the first bit of the mountain.

I was caught shortly after that first climb, and I neatly stepped aside and let him pass, but it was flattish so I could jog again... Letting him do the work I just followed. I didn't have any energy so 'jogging' along behind him was just what was needed. Now it was a little wet on this stretch so I had removed my glasses and on every rough turn I lost a couple of seconds as I had to let him go so I could see the blur ahead (I mean path). At about 7km the real race started... in the next 2km we would climb 450m into the grips of winter!!! Jayde caught us on the climb and went past, so I decided to go with him for a bit. I figured I could climb with him. On the zig-zags as we climbed I could see the likes of Andrew Hagen and Martin Kleynhans chasing...

I don't know what had happened, but we caught Will (he should have been up front fighting for a win) I now felt I was on a training run as I had 2 of my athletes with me... But this was no training run, it was a fight against the mountain and the elements. I was loving it, the path was a river and my feet were cold. Yes cold, I would have it a guess that it was about 5 degrees up there, and then wind chill... or in some peoples case wind freeze!!!!

I'm going to have to pop up there for a training run in better weather as I would love to see what it is like up there. The death zone was taking it's toll, the guy who had been running with me from 3km had dissapeared and then Jayde stopped to put on his rain proof jacket. OK he stopped just in front of me and shouted for help, Jayde, I sorry I didn't stop, but I really didn't know you were about to die from hypothermia and i was having fun splashing in the water. Lucky for him Martin was not far behind to help him put on his jacket as his hands weren't working!!!

I went through the top check point with no problems, but I didn't really have any energy to bounce down the mountain. I mean we dropped 178m in that km I took it easy letting a number of guys go by. We were still on a single track with 13km to go. We dropped another 100m in the next km before the path got a little flatter. I was jogging the easy bits but when it came to river crossings I took it easy, really easy.

With about 9 to go the path opened up and I wanted to start running properly again, but I wasn't well and slow would have to do... 9km is a long way when running slowly and with 2km to go I stopped for a energy bar chocolate. I was hungry and down on energy, 3h30 is a long time for me to be out on a run.

I finished in 20th place which is a little off what I would normally run. But I'm pleased I ran and didn't stay in bed, it was an awesome day to be on the mountain a real test of trail running skills.