How can so little training make one so sore...

One of the biggest problems with a comeback is getting the, now soft, body accustomed to training!
After the doctor gave the go ahead I didn't waste any time and jumped straight into training...

Day 1: 15min on the Bike! I want to say that was easy, but having not really bent my leg for the last 3 months it wasn't easy to peddle without my seat as high as it would go.

Day 2: 35min on the bike and the knee has started loosening up.

Day 4: Monday back to work and on the motorbike for the first time in 3 months. Sitting back a bit and I can get my leg bent enough to put my foot on the brake!
An evening cycle up to the club and then while the guys set off running I followed. Good to be out.

Day 7: still cycling up to the club... but today I was ready to run! The guys left for their warm-up and I headed down to the track for a couple of laps. The week of cycling had loosened the legs up enough for my first run! (Or had they?)
I hit the go button on Ms Garmin and off I went. It wasn't easy... the track didn't slide under my feet... I didn't glide through the air inbetween strides. There was almost no knee lift, but I was running. The knee cap felt loose the quads felt tight but I was running... my senses were  heightened to every niggle on every step I took! My head was working overtime deciding if the niggles were because of lack of running / training or the injury wasn't healed.
2km later I stopped enough for the first run.

Day 8: Friday and I was up early... not to run, but the swim... I wasn't heading to the gym / pool I was heading to the Waterfront and the canals. I squeezed into a wetsuit (great to keep the wind off you on the bike) and looking more like The Michelin Man then an IronMan I took to the water with the guys and girls from ATC.

Ok the truth be told they were long gone before I hit the water and that's a good thing! Ms Garmin was ready and had started counting the seconds before I had time to think about what I was doing.
Swimming is like riding a bike you never forget... my brain just takes longer to figure it out, to remember what to do. Good thing I was wearing a wetsuit... because if I wasn't I would have be crawling on the bottom of the canal, instead of doing crawl on top of the water!

Under the first bridge (I almost swam into one of the pilings) and my arms were hurting and I was thinking I would be turning early... then NO! I own Batman socks I can do anything! (I wasn't wearing them at this stage!) 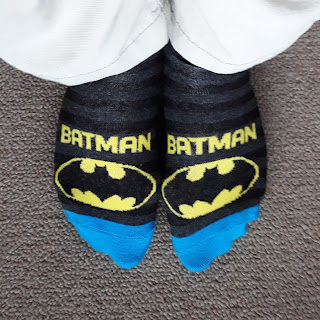 After what seemed like an eternity I could see the landing jetty and I swam on straight up... I wasn't going very fast so I didn't get very far up! I had no strength left in the arms but I still managed to pull myself up and slowly I inched my way up, like a walrus beaching on the ice!
Day 9: Firgrove Half no I wasn't running but on the bike to watch...
This wasn't the easiest ride.
The quads still burning from a 10min run two days earlier, 10min are you sure I didn't run a marathon! Then my arms ... never felt my arms before and now I could hardly lift them...
Oh boy I love training I love feeling like that... I want more... I've missed it!
#comeback2018