After Church on Sunday Dawn and I decided to pop down to the Waterfront for lunch. I work in Town and every day that I'm out in town I tell her about the large number of foreigners that are here for the soccer, so a trip to the Waterfront would give her a chance to experience for herself.

Boy was the Waterfront rocking with all English and German supporters getting ready for the match. The vibe was exciting and the food places were packed. Well the places that weren't charging R 150.00 a head were packed, while the over the top places were empty. After looking at a couple place (the ques were to long) we popped into Wollies and bought take-a-ways and sat in the sun to eat, far better idea. It was the most amazing day and one wanted to be outside. 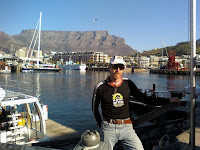 I know I should have taken a picture of the crowds, but I didn't maybe next time!
We left around 15h00 and headed out of the Waterfront turning right as we hit Town. We drove under the foot bridge to the Waterfront and the foot bridge of the fan walk heading to Kloof. At this point I pulled over and left the car to Dawn!!!
Wearing only bright Pink Pollies, a peak and a running back I headed up Kloof Street to Kloof Nek. Now as I headed up the hill something happed that has never happened before... First a lady leaned out of her car (she was the passenger) with her cellphone and took a picture... Then wait for it some-one else pointed a camera out of a van and also took a picture!!! I don't know why, but I would have it a guess that it wasn't because of my dashing good looks...
From the Nek my run home took me on the jeep tracks through Deer Park to the Kings Block House. and the contour path to Kirstenbosh, before taking the Green Belts home. It was a magic run on the most perfect day to be out in the winter sun.
Who knows what I'll be doing next weekend in between the Tennis and the Cycling.
Posted by coach dion at 10:26 AM