With a 05h30 start out in Stellenbosch it was always going to be an early start... The alarm rudely went off at 03h30, it was still night but we could lie around we had to pick Dawn's friend Jana up at 04h05 and hit the road. Arriving at Coetzenburg at 04h50 left us enough time to pick up our race numbers and stand in that morning Q!!!I went straight to the front of the 1000+ strong field and found Damian who was running his first Marathon, I planned to go out with him at 4min/km.


We left the track and head down the road, Yes those early km were a little fast, but we were running down hill and we could all ran at the pace. Mr. Garmin called 5km in 19:00 (road marking at about 15 sec slower). Things had settled and we had a nice group of people running together.
Don't know if you can tell, but that's the first lady with us. We went through 10km in 38:55, pace was spot on and all was well. I had been counting the 40+ guys and I counted myself in 11th place (ok 3 of them were running with me.) 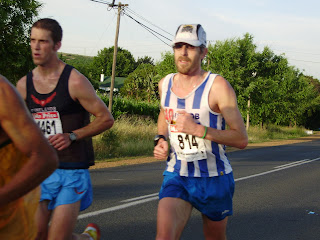 At about 11km Damian and I pulled away from our group and the race was on... No we didn't pick up the pace or anything we just kept it at 4's - 15km in 58:53. We had climbed our 1st little hill and Damian had slowed a bit but was still about to stretch his legs on the flat and down hill. I was feeling fine at 17km when we turned of the 'back' roads onto the R44. Up that first hill I was feeling strong, yes we lost a little time, but made in up over the next couple of km. We past half way in about 83mins still nicely on time. 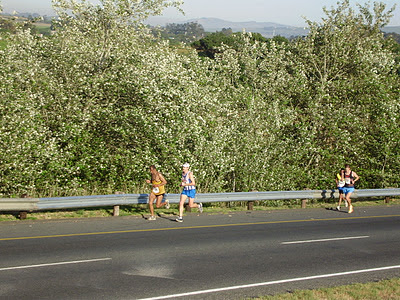 I pulled away from Damian on route to the 22km mark as we climb a hill. At the top I slowed to let him catch me but decided that his 2h48 wasn't going to happen and if I wanted mine I had to now run my own race.

With 7.2km left that 2h48 was still on the cards, but now my legs were getting tired and my right hamstring was getting tight... Not wanting to cramp of pull it, I had to control the run in and I lost a couple of seconds/km... I thought I could still break 2h50 with 1km to go, but that last 200m was just to long and I finished with a respectable 2h50:23. 18th and 3rd 40+