ALL IN THE NAME OF A MARATHON 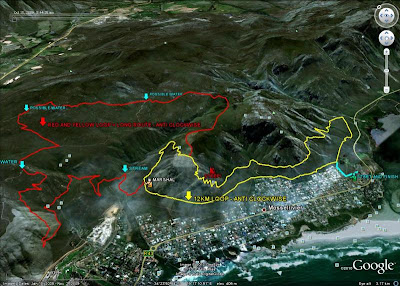 We ran clockwise starting with the blue - yellow - red - yellow - blue (the short course followed the yellow the whole way.)

With the Winelands marathon just 3 weeks away I had to put in one last big weekend to see how things are going. First up on Saturday I headed out to Hermanus for the Fernkloof 25km trail race. It was a small race with only one other strong runner, so if things held together I would pick up a 1st or 2nd. We started in the gentle rain and high level mist. I took the early lead and Derrick followed along the single track above the house line. 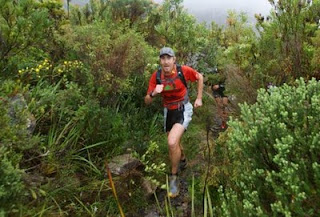 This is one of the photo's off the web sight, with me still in the lead and Derrick hiding in the bushes in 2nd. After about 5km we felt the single track for about 200m and in this time Derrick took the lead and left me for dead... OK he really just slowly pulled ahead. I just couldn't go with him. I did think to myself that if he had any chinks in his armor I'd catch him later (at the finish). At about 7km the climb started, we zig zagged up the mountain till 12.5km climbing 400m. At this point I would love to tell you the views took what was left of your breath away, but lucky for me, as I had no breath left for the view to take away, the mountain was still covered in mist and light rain. At 15km I took a split (last 5km in 31:52) then we hit a jeep track and I was able to stretch my legs running at sub 4min / km for 2.2km. I would have been able to keep the speed up on the single track, but I wear glasses and with them in my pocket (wet from rain and mist) I couldn't really see!!!

The single tracks on this mountain are very rocky and one has to watch were your feet land. I'm not saying I would have closed the gap on Derrick if I had been able to see, but I could have been a few seconds quicker. In 2h10:32 I reached the finish, 2 mins behind the winner, but happy with the solid run and ready for the half on Sunday!!!

Yes I was up early again the next day as my wife and I headed out to Durbanville for their half marathon. With a 07h30 start it was going to be hot out there and the fact that this out and back course was not flat but undulating! it was going to be hard to keep to my pace. I wasn't going to race till the last couple of km, at least that is what I told myself... The lead guys soon got away and I found myself running with Damian Will. We worked nicely together slowly dropping a 40+ who was trying to sit with us. I was in 3rd (40+) and I could see 1 and 2 ahead of me. I had done well till the turn, but then I had to make a move. I could feel Damian had spend his last penny and was running on empty. I set out to catch the 2nd placed 40+ on the first hill. I want to tell you that I was running like a man possessed and running him down was no trouble, but he was taking strain and I was really just holding my pace. 5km 18:28 10km 37:04 15km 56:47 I did have to work a bit harder in the last 5km to keep it together and Johnny (the 1st 40+) was slowing. I didn't catch him, but closed the gap to 10 sec. I was happy with the run, 79:25 was a good time after yesterdays 25km trail race, and if I had to keep it up for a couple more km, I guess I could have.

A marathon still seems like a long way, but I think the first 30km should go as to plan. What about the next twelve? Well I hope these last two weeks of training get me home...
Posted by coach dion at 7:43 AM