THE ANSWER IS BLOWING IN THE WIND

So what is the question? Well we have to be asking about Winelands Marathon and how is week one of the final block going.
I know weeks don't normally start on a Saturday, but this one did... I had to get back into training and long runs are needed as marathons are a long way!!! So on Saturday I met Jayde at the Nek for a little run on the mountain. 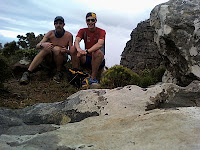 This is us at the top of Llandudno before our trek across the Twelve Apostles (we had already run for 78min and climbed over 700m), but the clock was running... A couple of months ago I had run this route with another friend Eddie. Well my friend Jayde is a little competitive so on we pushed. The concrete road from the dams was just an excuse to pick up the pace, and soon we were heading down the single and all Jayde was saying was: "Are we going to beat Eddies time!" 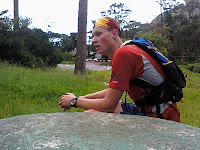 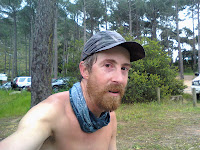 Well we did beat Eddies time by all of 10 minutes, but we were "SHATTERED MOUNTAIN MEN" and that was only the start of the 3 week block!!!

Now I'm going to let you into a secret on how to recover really quickly... Go home have a quick swim, mow the learn and trim the beard. You will not only look a whole lot better, but by the time you sit down for lunch looking over the crystal clear pool at the freshly cut grass you will feel a whole lot better too.

There was no easing into this week as we had a hill session on Monday and Tuesday we were up at 05h00 for a morning run.

Now for Wednesday I had decided to run the 10km race in Pinelands. I wasn't racing it like last week, I just wanted a tempo run a little quicker than marathon pace. Just under 37min, one of my athletes wanted to have a crack at a sub 37, so he was going to run with me.

Well if you know Cape Town you know the 'Cape Doctor', and he was out making house calls... Yes the 1st km was a little quick, but the wind was from behind, but turning off one of the main roads in Pinelands into the leafy suburbs I wasn't going to be taking the wind so I surged to a group ahead of us to tucked out of the wind. Yes I ran a little faster than I had planned, but I didn't feel any worse for it. I ended up with a 36:05 while Malcolm ran a 37:09 yes he would have maybe made it if I had run next to him the whole way, but some things he's got to do on his own and this was also my training.

So what answer did I get from the wind? Maybe in good conditions I could hold that pace for a half (+_ 78min) and maybe we are now on target for a 2h45 marathon. Yes the last 10 are still a bit unknown, but I'm going for it I've got a couple of weeks left to see if I can pull it out the old bag.