I had big things planned for this week; like running twice a day, or even cycling in the morning, BUT I’m still not running… So what is going on in my life. Monday saw me leave work half an hour early and head straight to the physio. Have you ever had crucifixions on your calf? Well after half an hour of trying to crawl off th

e table he stopped. Why did he stop? Well he wanted to stick javelins in my calf!!! I should have had my camera with me, I was pinned to the table with about 10 of these things stuck in my leg.

Tuesday's program was 12 x 500m with 60sec rest. I wasn't going to be running, but as coach I was going to be standing on the side of the track taking times. So I cycled up to the club and sent the boys off on a warm-up. I then popped back on the bike and did a couple of laps of the track cycling. With the boys back and ready to run I left the bike and walked to the 500m mark. I set them off and started my walk to the finish line. Now I'm not one for standing around, so I did a couple of lunges on my walk back. OK I did 50m of lunges. Now they did 12 x 500m so you've guessed it... I could hardly walk on Wednesday and I can still fe

el it today. My legs were so sore!!! I guess if I'm not running this Tuesday I'll do it all again…

My Star Athlete had decided to run the Avbob 15km are on Saturday, so I was up early to give my support and take a couple of pictures. It's a flat race out in Tableview, but boy does the wind blow!!! 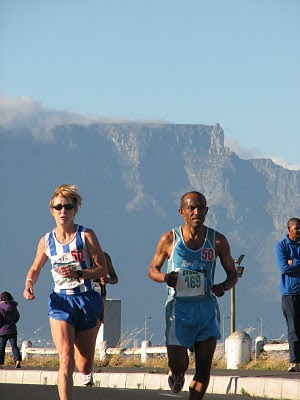 This is one of the pictures I took.

ps my Star Athlete is also my wife…