THE WEEKEND THAT WAS...

As I sit here at another show house (my wife moonlights as an Estate Agent's assistant) I thought I would look back at the weekends running:
Saturday morning saw us up early and heading out to Century City for a 10km race. After a couple of km warmup I found myself on the start line and ready to go. With big prize money (for a local race) the top guys took off leaving us for dead. Within a couple of 100m's I had formed a small group with Roger, Oloff and one of the top Ladies. I was aiming at a time of 36min. So as we past the 1st km in 3:33 and the 2nd in 7:06 and things were feeling comfortable, the race around me started to unfold...
We were now catching the early leaders in the Ladies race. I couldn't see her eyes, but she had now taken control of our bus as she set about hunting down the lead. Passing 5km in 17:40 I was still looking good for a sub 36min, but both Roger and Oloff had seen better days.
By 6.5km we took the lead, in the ladies, and I went to the front as I felt the pace drop. I wasn't going for a win I was racing the clock. I was now counting the km down as we caught a couple more guys. I was now feeling the pace and had to let her take her take the front. She was running beautifully and with 250m to go I had to let her go... I hadn't slowed, she had sped up. As I reached the grass the clock was still on 35 so I was home and dry 35:30! The form is slowly coming back.

Role on Sunday, and what better way to see if this form is really coming back then to 'Climb every mountain'. So I met Jayde in Tokai at 07h10 (I like to sleep in once a week) for a simple out and back run. (or should that read: Up and down run?) 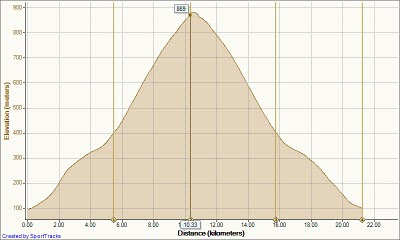 I had decided I needed a little hill run, so it was up to the mast. I always break this run up into 2 sections; the first through the forest on the gravel road, and then around and up the last bit above the forest on the tar road... The forest was full of mountain bikers and those going up just had big targets on their backs as we ran them down. With the main baboon troop down at the bottom we didn't have to run though them, but there were a couple of lone males sitting on the side looking out over the suburbs. I took the split as we crossed the onto the tar 30:02 (5.45km, with +_ 350m climb) just a little slower than I had hoped for. I thought we were running fast enough to go under 30min.
I don't know why this always happens, but once we hit the tar I end up running alone!!! It was only a couple of 100m's before Jayde fell off the pace. The climb up the tar is 4.9km with +_450m climb so up I went into the clouds, I don't know why I was wearing dark glasses because the top of the mountain was in cloud when we left. I was happy with the time as I reached the gate at the top 28:28, total climb time 58:30. 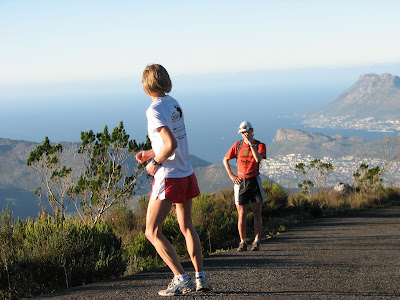 That isn't me, and nether of them were running on Sunday, and the weather wasn't sunny, but that is the view I was hoping for...
Posted by coach dion at 7:13 AM