Last night was our club prize giving, so I wasn't allowed to be late home from the track as both my wife and I had to be there. Lucky for me I had planned a short session of 3-4 x 1000m with a long rest (not an easy sesion. If the session was something easy like 8 x 1000m 60 sec rest I would have been running late.
After a short 20min warmup I had the boys at the 1000m start line and was explaining to them that we had an easy session today, just 3-4 x 1000m! Is that all, and we have a long rest, so how fast are we running? Well my answer came back FAST.

It was fun, it burnt, I was hurting, and that was all in the 1st one. I went out hard and tried to hold on, but slowed over the last 200m. My 2nd one I started a little slower and was able to fight to the end finishing a few seconds faster. I could only hold on for a 3rd... The track looked like a battlefield with bodies lying all over the place. I do love been the COACH... I ran the 4th as a warmdown with one of the slower guys and then it was time to head home.

I've been a member of VOB since 1991 and I always try to get to the prize giving. YES I win a couple of prizes, but then anyone can. I got a prize for running 7 of the 8 Cross Country's, I also was in the Top Ten (we get club points for every race you run, and I run a lot of races).
Now I was running well in the first half of the year, and ran a club colours time for a 15km race and got a mention for that, only the one last year, let us hope 2011 is a better year. Now the big prize for me was the Best Vet trophy which I took by a whisker from Michael. 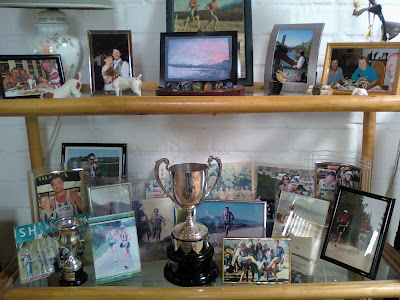 There is my trophy in the middle, Dawn also won a trophy...
Posted by coach dion at 7:50 AM