TO MUCH HE CRIED

I've been injured and have been on the come back trail, so I've been taking it easy; Right, Wrong. My January has been full of races, 6 in total, and I have another 2 this week...
That was going to be my month, but than Dawn bumped into a friend who told her I just had to run the trail series race on the weekend as it was fantastic out there. I know I should have cut back on the sessions this week, but if I'm pushing the squad I feel I must be running, so my week went like this:
Monday; Hilly mountain run
Tuesday; 4 x 2km reps (faster than last week and with only 75sec rest)
Wednesday; Trail race
Thursday; 2 x 5.2km hard (THE EVIL COACH)
Friday; Rest
Saturday; Now this is were I really should have stayed in bed, but I love my mountain!!!

You see be this stage I know about Sundays race and normal people like to rest before a race, so what did I go and do, I went for a long mountain run. 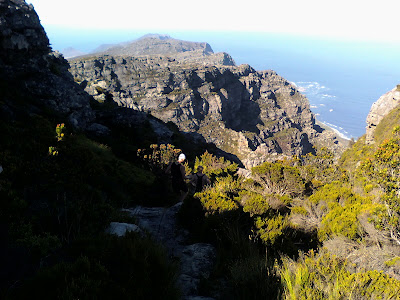 And for views like this on a clear wind free morning, I had to join the boys. My run didn't start off well with me turning my head to look at some hikers on another path above us and falling flat on my chest and right elbow. 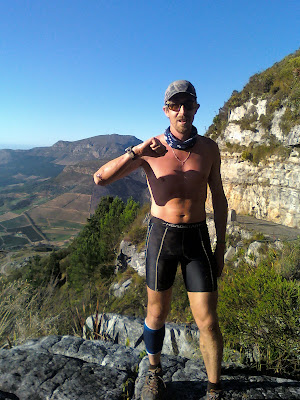 I Just had to get up and keep running it wasn't till me got to the tap at the top that I could wash myself off. The mountian is dry and none of the little streams were running.
I wasn't running well in the almost 30 degrees and the boys left me on the single track up to MacClears. 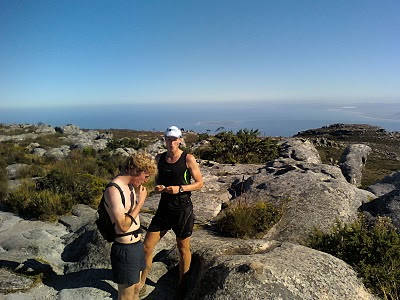 If you look carefully you can see Robben Island in the background, while Ake and Jayde waiting for me. After 2h25 of running/walking we had covered 20km with over 1000m of climb and I was pleased to see my car waiting for me.
I quick swim and some Chocolate Milk and I was ready to take on the world. I had to be as there would be no time to rest and we were also going out that evening!!!
The Alarm went off early on Sunday morning as Paul Cluver would host the next Trail Series race. Again I wasn't lining up to race, but just for a hard run, but the route was fantastic so after a couple of km I was near the front with 4km of climb to come... My legs were tried from Saturdays run, but I still had enough in me to show the youngsters a thing or 2 about hill running. By the top I had a 30sec lead on Eddie, but running on tired legs meant I had to take the rocky single track slowly and lost my lead. Rupert also caught me, but there was still life in the old man and I fought back taking him on the last hill to finish 2nd and first vet. 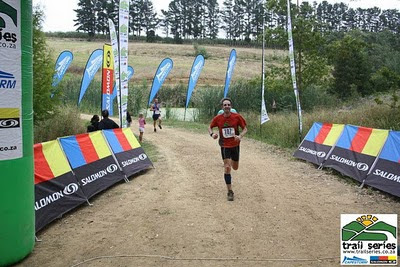