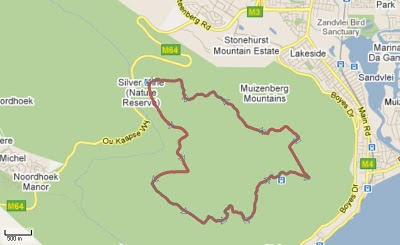 Why, the day after a big session am I lining up for a race... That I can't really tell you, but it goes a bit like this:
I have new trail shoes and what better way to test them then run a race... I wasn't racing, just running... (Like that was going to happen.)

So I lined up at the front, (I always do that, I don't like running further than I have too). Owen set us off, and a couple of the guys shot off... Last year I was one of those guys! But this year my body is fragile so I started easy. Boy were those first couple of km fun as we set off done the gravel road. I had people all round me and we were talking and joking, but then the hills started and the single track followed. 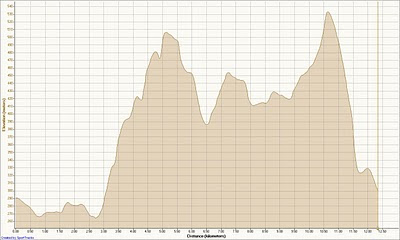 And I just couldn't hold back any more, 240m climb in 2.5km on rocky single track, I had to go... I still wasn't racing, but I was running hard, and by the top I found myself in 2nd pace.
This was unplanned and as much as I tried to slow down the trail was to nice, and I wanted to see how the Hi-Tec Infinity's did over this terrain. The legs were tired and on the 'so-called' flat bits at the top I could feel my calf, but is wasn't bad and the next climb was coming. By this stage I lost my 2nd place but there is nothing like a hill to slow the race down...(and I can run slow!) So I made my move and past him taking back 2nd. I descended like a 'Mountain Goat' not missing a step the shoes were great as I took to the rocky 'stairs' with leaps and bounds.
Finishing over 2mins behind the lead was fine, I was just surprised that I ended up racing into 2nd place, why was there no-one else running fast? I didn't deserve 2nd, but I'll take it, I like week fields...
Posted by coach dion at 8:24 AM