The cloud in the sky and the mist on the mountain as we drove in only promised rain later in the day, but some of the 50km runners would get caught… They had started at 06h30 in the dark and we could see the headlamps bobbing along the side of the mountain! It was still dark when the 35km runners left and those headlamps disappeared down the trail.

We only started at 08h00 so no head light for us… Runner conditions were perfect as we set of down the gravel road, but unlike other years I didn’t have the legs to set the yearly pace! The top kids were out to play and they didn’t want to play with this old man!

4:03 ok I wasn’t running slowly, but on that first hill I felt a little sluggish, so I didn’t push or drop the guys I was with. While we were still on the gravel road it was no longer wide enough or smooth enough for a car (of any kind!) There were about 8 guys ahead, but 2 of them were catchable… I made my move in the 5th km as we turned off the gravel road up the mountain!

By up I mean up though a forest, the kind of hill that you use the trees to pull yourself up on, Strava calls it 100m with 96m climb! With only the top 6 ahead I took to the single track along the contour to the saddle and hoped to open a gap on the chasing crowds. I was going along nicely till I kicked a rock (stupid thing to do) no I didn’t hurt myself, but I tumbled into the bushes and lay there in the dust trying to get up. In my head I could hear the clock ticking as everything had turned to slow-motion! I was running again, but now paying a little more attention to the path, as one should in trail running. Maybe I wasn’t sluggish, but tired!

Someone was chasing and once I was over the saddle I picked up the pace again and while I wanted to fly down the ‘road’ it had to watch my footing… The clay was too hard for my shoe to ‘bite’ into and as slippery as ice. I was running in the New Vivo WP’s (weather proof)… they were great for the hard trail and for splashing through puddles.

Our 25km race kept right as the 50 and 35km races turned left and up, maybe next year! We soon turned off the ‘road’ and I caught a glimpse of 2 guys chasing me… While I attacked the firebreak with new found speed this was Dom’s forte and shortly after I turned onto the next single track I let him pass… Colin, another 40+ athlete, wasn’t far back, so I used Dom to set the pace and the 2 of us eat up the miles! The 50 and 35km races had re-joined us and then at the next junction our route turned down again while the others went straight… Dom went straight…

Dom, Dom, Turn Turn!!! I now had the lead (ok we were only 7th and 8th) 3:51 the fastest km of my race, but I wasn’t dropping Dom who had closed the little gap because of his detour. We had dropped Colin!

You can’t run quickly though rivers but with Dom on my tail I pushed on sliding over the rocks and splashing on, out, onto the sandy bank and down river. My shoes were heavy… a tighter shoe less water, lighter socks less water, less water less weight! Back across the river, and again, I let Dom pass and with the river crossings finished for now I pulled my laces tighter. As we passed the aid station Dom pulled ahead on the climb! I had worked hard and was feeling it now. He was passing people from the longer races and if I didn’t want to totally lose touch I had to get running properly again.

Oh dear Colin was back on my tail, so I upped my game again and started to chase Dom putting in a couple of faster km on the gentle climb next to the dam. Dawn had done her own run and was on the, now gravel road supporting. While I caught right up to Dom it was too late as we turn down and he dropped me again. Colin was now about 60+sec back but I wasn’t letting up, he’s a good runner and 20 years ago use too kick my butt! Now the route takes us around the dam and over the river, but one of the signs had blown down and with the dam so low, we (Dom, Craig, who Dom was chasing, and me (others also did)) we ran on the edge of the dam up to the river crossing! With the laces tighter for this crossing the shoes did better, but I wasn’t catching anyone… I could see Craig and Dom fighting it out as we headed home!

I finished about 6th and kept my 1st 40+ place. It had been a hard morning out and I was ready for a sherry from one of the French Maids on hand!

Packing it on the Trail!


If you know me and don't know that I love the mountains and run on the mountains then... it's time to wake up the coffee's cold! Now While I’ve run lots of miles on the mountain I’ve also run lots of miles on the road! Now if you are heading out for a 2 hour + run on the road the you might plan your route past a couple of taps so you can stop for water, other than that I would pull on a pair of shoes and hit the road. So easy…

When hitting the trails, well it’s another story: The weather can change, you could take a tumble (not saying that this doesn’t happen on the road), you might want to stop and take a picture! And then the trail might not have any water…

So what about a pack to run with? Yes over the years I’ve run with a lot of different packs, and maybe each one I’ve run with has been better than the last, so let’s run though the packs I’ve ventured onto the trails with…

This might well be the first pack, not made for running, but a day pack! 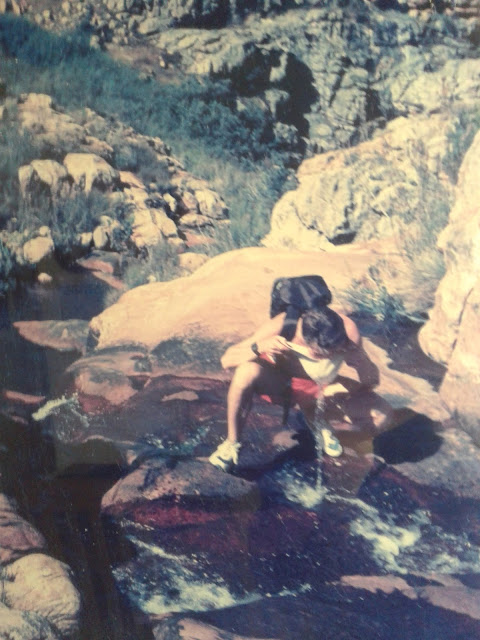 The in the early ‘90s I found this pack…

Then while running The Cape Odyssey I was lucky enough to win a Salomon pack… It was a little more aimed at running and worked well.

I was also lucky to get my hands on a Camelbak Blowfish, and while I enjoyed running with this pack it was a little heavier (good for training) but very comfortable on the back, extra padding!

Now 8 years and who knows how many racing miles later it's time for a change, it's time to upgrade, it time to put a new generation pack through it paces...

So how do you choose a pack, well it's about what you need the pack for, and like all those packs before I need a pack for trail racing, something that sits comfortably on your back, holds enough water and then all the gear the race organises ask you to take on the trail… Food, Cell-phone, First Aid Kits, Rain Jackets, and sometimes a fleece!

I have been lucky enough to get my hands on one of the best pack out there... The ULTRASPIRE ALPHA


WOW look at that stretchy straps in front to keep the pack from moving around and pockets in the front. I use one for a water bottle with an energy drink in, while the blader has just water. There is more to this pack than that, but...

OK so that was me out on the mountains with a full pack seeing how it feels... Now for me who likes to run without a shirt this UltraSpire didn't leave a mark, those front stretchy straps worked well! In the past I've had "carpet burn" on my back when running without a shirt. One more thing that stood out for me was that with the front and side pockets the weight you are carring is spread round a bit and not all pulling your shoulders back, so the pack feels lighter!

Can't wait to race with this baby on...