Last week was my shortest week of running since September 1999. Back then I was coming back from an injury that had put me out of action for 9 months, and no I wasn't pregnant!!! Having not been able to run the HBTC on the weekend I had to do something. So before the Tour De France got exciting I decided to clean out a cupboard. This didn't last long as I found my old skipping rope and decided that I could skip, without putting strain on my hamstring. I went outside and started jumping... 200, 300, 100, that was about 5 minutes of jumping. I wasn't that tired, but it's a bit boring as you don't get anywhere.

Sunday morning Dawn went for a run and I lay in bed, but only for an extra 10 min. I then got up and took the dogs to the field for a walk, and decided to run a bit to test my leg. 1km later I called it enough as I could feel the hamstring. Peanut had stuck with me the whole way, while Shandy had taken short cuts across the field. With the dogs walked and Dawn still running I picked up the rope and started jumping. This time it was 5min without stopping another 600 jumps.

Monday I popped up to the club and once I had sent the kids off training I took out my rope and started jumping 5min, 660 jumps. Then I walked across the field to tackle the pull up bar. I think I've put on weight... as I struggled to pull myself up. Once back at the club house I jumped again, another 5 min, 670 jumps. I then tried a couple of push ups before the last 5 mins of skipping 670 jumps.

With 15min and 2000 jumps behind me I called it a day, let us see if I can keep my fitness up with the old skipping rope.
Posted by coach dion at 11:52 AM No comments:

OK maybe not all over, but things are not going as to the master plan.

This is my first year as a Vet 40+ so I had planned on taking on the club colours and seeing if I could get full standers in all distances. As a senior I didn't really have a chance, but as a Vet it is do-able. A couple of weeks ago I went out to Eesterrivier to run the 15km race. Aiming at 52min I went out and ran 51:38, so this Sunday I was aiming at running a 10km in sub 34min. This was there for the taking, well if you look at the training and the time for the 15km I was in shape to run in the 33's.

Tuesday I did a 1000m session on the track and with times of 3:18 3:16 3:13 3:09 and was feeling good. Wednesday I had wanted to run a little shorter than normal, but because of a dog!!! we ended up running about 1km further than I had planned. That shouldn't have caused any problems, but on the way back to the club the boys picked up the pace to about 4min/km (shouldn't be a problem for me) but as they pulled away on the Main rd I had to let them go as my left hamstring was feeling a bit tight.

I did a bit of home treatment and Thursday I only race 1 x 500m and with another days rest I was feeling OK come Saturday morning. Dawn and I took the dogs for a 3km jog in the green belt and I felt good so Saturday afternoon I headed out to Koeberg for the 5th league Cross Country.

I might well have lead the race over the 1st 400m but I wasn't running hard or fast. with the fast 35's and 40's flying by I had settled into a pace than seemed OK with my delicate body. After crossing the start finish line in 15;36 for the 1st 4km I was happy... for only another 100m!

Then, did a snake bit me, was I short in the hamstring, but that was the end of my race. Yes I could have stopped and turned back the 100 or so meters, but CC is a team sport and if you can you run all the leagues so I chose to hobble round and finish. I was 7 minutes slower for the 2nd 4 km.

My leg was so sore I was worried it wouldn't work when changing gears driving home and I would find myself driving home in 2nd... That didn't happen, but I'm now sitting at the office hoping to get a physio appointment.

As for my 10km I was on the side of the road shouting for Dawn who manage to run her time of sub 45min. This coming weekend I had planned on racing and even winning (if things went to plan) Hout Bay Challange Saturday morning. running the CC that afternoon and then for good measure racing the Trail race on Sunday... Well if Grant can't fix me and fast I will have to sit a couple of those races out.
Posted by coach dion at 7:14 AM No comments:

ON TOP OF THE WORLD 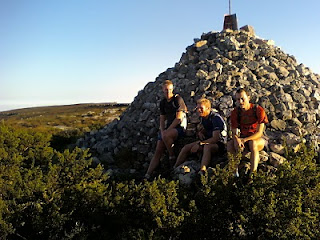 OK we didn't quite make it to the top of the World, but we did make it to Macclear's Beacon.
Saturday saw me meeting a couple of friends for a run up the mountian from Constantia Nek. Keeping the pace honest we made good time getting to the Cape Town landmark in a few seconds over an hour.
We headed back by heading to Platterklip and turning left through Valley of the Red gods it was a fantastic route to head back on, taking in the views over Camps Bay and the Atlantic Ocean.
Posted by coach dion at 7:41 AM No comments: 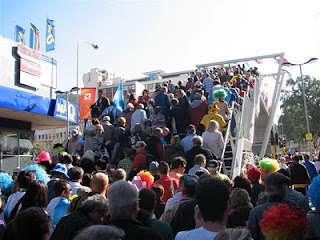 On Saturday Dawn and I decided to head to town to walk with the soccer fans to the stadium... we weren't the only poeple with that idea.
It looked like the whole on Cape Town was out to feel the vibe. They say that over 250 000 people were in town. From the Fan Park to the Warterfront, and like us, just on the Fan Walk 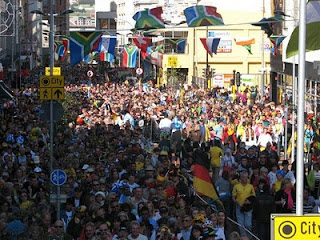 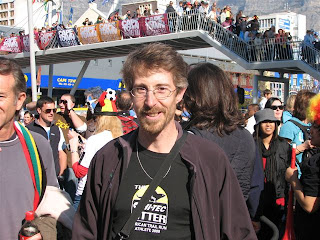 .
The vibe was amazing it was well worth the walk. Having parked at the office, we took a short cut back from the stadium and left town at 15h30 getting home in time for the kickoff!
Posted by coach dion at 9:34 AM No comments: