No race really starts on the start line, and this was no different!

Dawn came home one day and said fights to Italy are on special... next thing I knew the tickets were booked and I was looking for a race! My Italian is as good as my Latin so it wasn't easy to find something that could fit into our travel plans, but Lake Como looked like a good detour!

119km sounded exciting but having to leave for Venice the next day and the fact that I had spent most of last year not running I looked at the other options.
30km or 60km for reasons unknown to me, I went for the 60km (maybe the 4000m of climb excited me and I thought I could put enough training in!)

The training was coming on and I was getting fit but about 3 weeks before we left I picked up a couple of niggles... Downgrade said Dawn, No said Dion. It's only 60km and there's lots of walking involved I'll be fine! The last week of training was done walking the sights of Rome, Siena, Florence as the holiday unfolded. (This walking was the best training ever, easiest way to spend up to 8 hours on your feet)
Lake Como is amazingly beautiful and the perfect setting for a trail race (or a training holiday). We joined the other runners in the town square of Menaggio... me on the start line and Dawn watching.
I was on the 2nd row when we started and was looking for a chance to move up as we started down (up) the little streets of Menaggio... some Italian had taken the lead and with a Englishman following him I thought it a good idea to add an African to the mix.

With only 200m or so done the climbing started and wanting to hold myself back I stayed in 3rd place even looking to walk the first stairs!

It took about a km of town running for the 3 of us to come together and while I would close the gap on the flatter sections the other 2 would open up a meter or two on the steeper bits. While there were a couple of little trail sections in the first 3km it was mostly through the old villages stretching up the mountain! I found myself passing the Englishman  and pulling alongside the Italian at about 4km and then...

I took the lead! I promise I wasn't racing but... there was a lovely looking single track and well it was time!

Time? Yes time to climb... ok we had been climbing already to get there!

I was loving it feeling great (this surprised me a bit after the last 2/3 weeks before leaving on our holiday didn't go to my training plan) and enjoying the lower slopes of the mountain.
I was first to the first check in (about 10km and the top of the first climb 1500m) I left before the others arrived and set off on a bit of downhill! Thinking the others would catch-up I made sure I kept a solid pace on the smooth bits... I had set my sights on getting to the top of the mountain first and I didn't want to be playing catch-up. It was the Englishman chasing but while he was, I hit the climb first and started to open the gap again...

We weren't on a real path but on a steep grass bank not smooth but chewed up by cow hooves! No running here just power walking following the route flags. At the top, the path became viable... only problem was I wasn't at the top I was now following the ridge line and climbing to the highest point.
The views from the top were amazing and would have been even better if the haze below was clear. 15km and I had reached the highest point 2h32 after starting... not my fastest 15k but with about 1900m climb I'll take it! 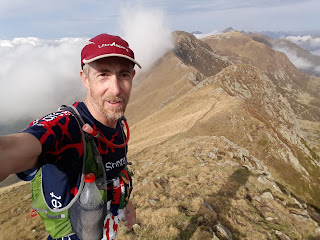 Time to recover I was hoping for nice Alpine trails to wind down the other side ... I was wrong we were too high for nice trails as only a few hard core hikers ever get that high!

I'm too old and fragile to fly down steep rocky trails so the lead I had would not last. That said we had now been going for 3 hours and my lack of training was about to show!

1, 2, 3 and 4 passed... they reached the lower slopes and then I did... didn't think the gap was that big and the trails had eased so I could start running!
Into the forests I went chasing the front guys (and leading lady yes she was one of the 4 who had passed me!) but my chase was slow and they disappeared in the trees, I was alone enjoying the trails... the enjoyment didn't last! With about 20km done so was I! We had to climb up to the 10km mark check in... approaching it from the other side we had run 22/23km and would head off in another direction.
The path ahead looked amazing but I didn’t have any bounce left in my legs. 4 hours of running on not enough training will do that! (Maybe I should have downgraded to the 30km) too late I had 60km to get through!
That said I had been thinking I would finish in 8 hours and with Dawn waiting for me I didn't want her worrying so I start thinking about pulling out and taking a shortcut back... (holiday more important than the race!)

With most of this down finished and the villages above the lake now coming into view I saw her... yes Dawn had walked (jogged) up to watch us run past! I didn't run past  I stopped to chat! Changing my finish time to 10-11 hours. (That's a long time) I was no longer racing I was out for survival! This is not a game I normally play. Finishing has never been a problem... I like to be up front fighting for top positions. Today's race was turning into a fight to the end.

I was now running thought the top end of the town / outlying villages and while I could run the downs those ended! I had another mountain to climb... I was jogging as the climb started, but we left the village and entered the forest! While this should have excited me I was stuffed and instead of thriving on the climb I was broken.

7.5km lay ahead of me 1100m of climb would take me to the top of the mountain... 2h08min of fighting gravity and my legs that were just getting heavier and heavier with each step! All I wanted to do was lie down and sleep! I was looking for a way to pull out, I had had enough it was no longer fun! (Not I wasn't even taking pictures anymore!)

Finally the trees thinned and the top was close I put on a smile and walked into the feed station. The food was great and I tucked in bagging a couple 2 chocolate cookies for pudding later! I mentioned that I wanted to pull out that I had had enough, but the guys at the feed station would have none of it! Telling me 2 hours easy down hill all the way back. I said no let's aim at 3 hours I slapped my legs (to wake them up, it didn't really work) I said let's try this...

I started walking then I tried running and it was easy the legs worked... I picked up the pace and got into a happy place, running on a mountain! The gravel road became a single track and I was flying sub 10 was happening. The path was now steep and the legs were still working! Loving the trails again I didn't even mind the bit of downhill scramble.
What an uphill... walk! Legs still to heavy to run up (or I was just lazy)! 5 or 6 km to go and we headed through a thick jungley forest when my leg almost gave way! A sharp pain shot though the leg and it didn't want to hold my weight... (felt like someone had stabbed me)
5km to go 1-2km of fun forests downhills to still get through... a 5-6min weave down the single track turned in 22mins sharp pains with with every step.

I had never been so happy to be out the forests and on the road... I could walk... race walk the straight leg thing was working and as long as I didn't wobble I was moving 12min (not the 6min km I can do when racing)

500m to the finish line...(I tried to jog in, but no the leg would not let me!). 10h27 that's a long day, but I'm happy I fought through and finished! Not happy I'm injured, it looks like I've damaged my peroneus and there could be more damage in that leg! (Hope not, going for a scan this week!)

Posted by coach dion at 1:54 PM No comments: