Barring the years I did Ironman this was the most cycling I had ever done 820km for the year! (my running is normally more than that! This year it was only 371km).

Now having done most of my training on my old mountain bike, my friend Mark lent me his old road bike! Don't let the word 'old' fool you it's made for speed and with the right engine it would fly... Was I going to be engine enough!

With a start time of 08h54 most of the fast boys (and girls) would be long gone, but I was hoping for a couple of guys in the group to help me round the peninsular! 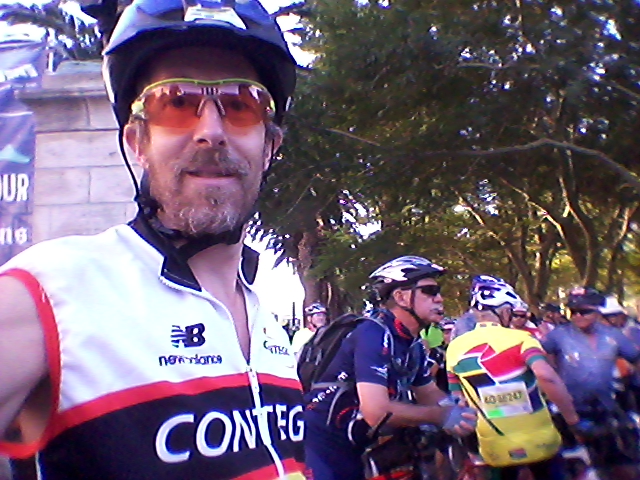 Most the group was on their bikes with their lead foot cleated in, while I had my left foot in the toe clip I pushed off, one, two, three... I was fast enough now, so I hopped on the bike and sliding the other foot in I set off! I was in front, I was leading the Argus (ok only group 4G).

I wanted a solid start, I didn't mind leading the peloton onto the elevated freeway!1km in and we were passing the the earlier groups, I look back to see how strong my group was and it was me and just one other guy!!! The riding was easy as we fly past 4F, they covered the whole road! (one would think a group of 75+ year olds and guys with over 21 tours would know how to ride!) I was still leading as we hit Hospital Bend! Now I have a fear of DEATH and why push hard down the early hills as there is still so much riding to do... suddenly I was 2nd and he was gone! I did catch he before the drop to Paradise, but my tow didn't last long! I really thought I would catch him on the first real climb of the day, but while the gap closed as we climbed passed a stream of slower riders he was still 15m ahead as I passed Dawn cheering for me on the side of the road.

I didn't gun it down onto the Blue Route, I was alone and knew I still had a lot of work ahead of me. a couple of guys took me on the down hill, but... I hunted them down as I powered into the deep south. I was still overtaking guys and no-one from behind had caught me. Tri-bars would really have helped as I tucked down into a time trial position. I wasn't grinding out the big gears I was spinning into the gentle breeze.

Along the Main Rd after Muizenberg I was alone... the guys I had just passed slowly disappeared behind me and the next guy in front was 200+m down the road! The Main road was quieter today that on my training rides!

It wasn't till I climbed out of Kalk Bay and headed to Fish Hoek that I was caught! But not by a group, by a man on a mission, so I joined... This was great, my speed jumped from 29km/h to 35km/h. He once asked me to take the lead which I did, but I was too slow for him, so after about a km he hit the front again (I think he then decided to drop me!) Till then most of the small groups we passed on the right, but now he started headed left and weaving through them. On the climb out of Simon's Town he lost me in a group and I couldn't get him back!

At the bottom of Smitswinkel A group caught me, but it was guys I had just passed so I road away from them on the climb.

It was nice to have that behind me and I really thought I would have a couple of guys to fly down with... but it wasn't till it flattened out that a guy came up from behind me and said: Let's go...

That lasted about 500m when the climb to Red Hill started and I left him... Now I don't remember if the couple of guys who passed me on the way down to Scarborough were catching me or just 'unlapping' themselves.

I was no longer the power house of a ride that had start 2 hours earlier, I was a broken man and on the climb out of Misty Cliffs the couple of groups that caught me didn't have to work to hard to drop me on the climb.

With Chappies ahead of me I stopped to fill my water bottle (2 would have been enough if I had a group to ride with!) With little Chappies conquered I couldn't believe the speed a couple of guy fly down to Chappies, once on the climb I stopped been passed and started to weave through the battlefield that was Chapman's Peak!

Only Suikerbossie left, 2 bumps and the crowds to help you up... Now with Cape Town in the grips of the worst drought in years, I can't believe some guy (was tempted to use a different word here) had his garden hose on to water the road and a couple of hot riders! (hope the City fined him!)

Suikerbossie... Strava calls it 1.8km long with 125m climb, not the biggest climb I've ever done, but with 90+km into the race and over 3 hours in the saddle it was time to stand... I wasn't on the old mountain bike with 'granny gears' so my left over power would be needed to get the the coastal road home! 8:25 (Strava split) later I was heading down, I was cranking out the big gears... with the end in sight

No sprint finish, No heroics, just a little smile... That was a lot harder than I wanted it to be and I didn't have the time I thought I could ride! It was like Ironman 10+ years ago a Time Trial, No slipstreaming aloud! So I have to say I'm not upset with my time of 3 hours 41:48... 20th tour done
Posted by coach dion at 3:09 PM 2 comments: