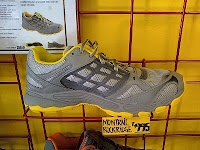 Got a new pair of shoes the other day and had put off wearing them because of the rain, something to do with the "They are new, I don't want them to get wet," theosophy. Anyway I took them for run on the contour path last Saturday and they did just fine, but then yesterday I took them for a real test!

I met Jayde at the Nek at 08h00 and we set out to test the new Montrail Rockridge. From the Nek we headed up the single track, no heroics as we had a long morning ahead of us. The path up is mostly sandy with wooden stairs and running slowly / walking up there didn't even test the shoes. On the top we took the concrete road to the dam wall and crossed over. Just a point there, 15min on the road went fine, but the shoes would only really be tested on the road on the way back. The rain of the last couple of days was a thing of the past, but the old railway track to Kasteels was a little wet and I found myself running like a fairy hopping from one dry spot to another still trying to keep the shoes dry.
Kasteels was the first real test, but with tired legs and a very wet track I took the down hill easy and yes the shoes were great but I was still taking it easy, that was till the gradient eased and the wet sandy rocks turned into a river!!! There was no more dodging the puddles. The river took us down to the Pipe Track which was also mostly under water. I was now running without a worry in the world the shoes were wet and my feet were cold, but even through the water the ROCKRIDGE was firm under foot and I never missed a step. Now here is something I really liked about the shoe: The river came to an end and we had a bit of dry path to run on, and unlike other shoes that seem to take forever to dry I felt that the ROCKRIDGE just needed a few steps to splash out the water...
From Kloofnek we started to climb again, we took the stairs (there wasn't a escalator and I didn't have money for the cable car) to the contour path. The views would have been amazing but with visibility down t0 less than 20m due to the mist we couldn't see anything. After 15min of climbing and an energy bar we headed to Platterklip. Once again we were running through rivers, lakes and waterfalls. With mountain to the right and cliffs to the left I never once worried about losing my footing.
With almost 2 hours of running we decided that getting back to the cars at the Nek was more important than racing up Platterklip, so our only aim was to run down the tourists, and boy were the English out in force. 28min later we stood on the top with just a little jog on the flat top of the mountain to go. OK Table Mountain is anything but flat, and heading through Echo Valley took us down steel ladders and along wooden pathways, I’m sorry to say this is were the MONTRAILS let me down and my legs slipped out from under me on the slime covered wooden walkway. (Are they trying to kill people, those walkways are lethal when wet.)
The shoes had held up well after 3 hours of the roughest trails I could throw at them, now on tired legs I had 20min of concrete road to run. Let me just say this: I’m not going to be lining up for a road marathon in then any day soon. Something I have done in my STREAKS!

In closing, I have this to say: for real trail put on the ROCKRIDGE you won’t be sorry I’m not.
Posted by coach dion at 7:31 AM