The loneliness of the long distance runner

For a couple of years now I've been running in sandals and when I saw that "my sandals" (T-rockets) were one of the sponsors of this race and offering your entry fee back to you if you raced in sandals, I thought it was time to make a Covid Comeback to racing… 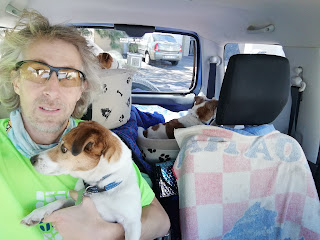 Now The Langkloof isn't in my backyard so I packed the car and we headed off for a long weekend!

Our destination Louvain Guest Farm (somewhere between George and Oudtshoorn).

Arriving on the Thursday (yes a proper long weekend) meant we had the farm to ourselves till Friday afternoon.

No, the time wasn't spent lying around relaxing with my feet up, we had dogs to walk (Jack Russells, 3 of them), and wait for it, horses to ride. 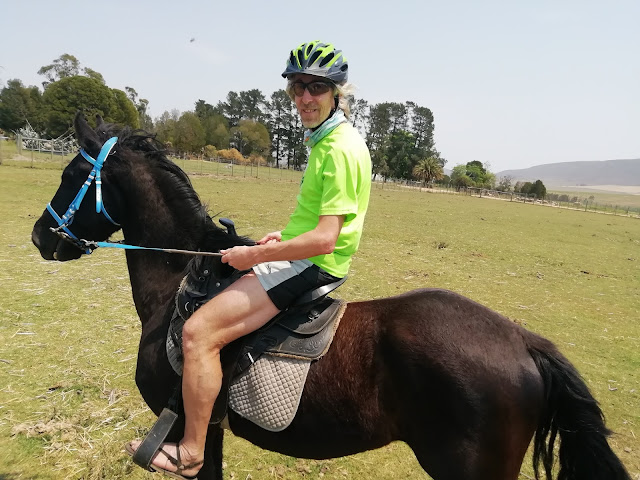 Saturday, race day and I was ready to go…

I took the lead with the hooter that set us off (mostly because I was the only person standing on the start line!). It was nice to be racing again, running with focus… My lead was short lived as 2 young guys jogged past just as the first climb started. I tried telling myself I wasn't racing as they pulled away into the mist, I was just running… I looked back to see a couple of guys chasing up the hill, but it seemed I had the better of them for now. 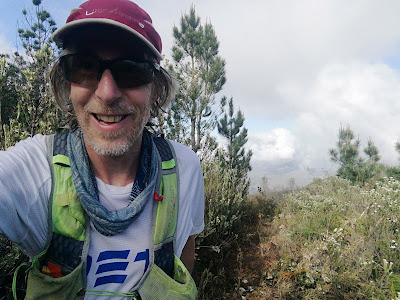 Don't race Dion, you aren't fit enough to push for 36km (3 to 4 hours on the mountain) I told myself this at every turn as I start to close in on one of the young guys. After about 4km (3 of climbing) I was about 15m from him… But the road flattened and once again he disappeared into the morning mist.

We reached the saddle and the 1st water table at about 6km. I hadn't touched my water, but forced down a cup of theirs. The race now headed down the other side of the mountain for 2 or 2.5km (some of that was flat) then The Beast turned right (leaving the guys doing 16km to head on straight)... Don't think this road had been used in years leaving us a slow 230m climb in the next 3km before we crested the top of the next mountain. 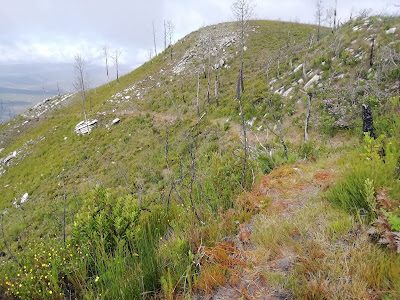 The guys ahead had vanished, but I could see a red and a blue shirt still chasing me. I was now taking a couple of splits and while I had seen them I didn't get a time, it was over 2 minutes, no need to race (yet)

What followed next was trail running heaven, a freshly cut single track around and down the mountain 160m drop in that 1km and 104m in the next. We now had hit the old forestry roads, and next 5 or 6km took us down to the river dropping another 350m. I was controlled in my running keeping the pace around 4:30.

Still no sight of the leaders whom I guess were gunning it down fighting for line honours. A glance over my shoulder told me my 3rd place was safe for now with the chasing guys out of sight.

The sun was long out now, and had first melted the mist and had now turned its attention to the runners..!

22km brought up the next water point and a river crossing… I hopped off the bridge and dropped into the cool mountain stream. Magic, just magic having that cold water wash over me, just sorry I couldn't really stay in for longer than a couple of seconds as we were still in the race and lying 3rd meant a chance of climbing onto the podium. So I filled my water bottle knocked back a coke and set off on the last climb of the day… 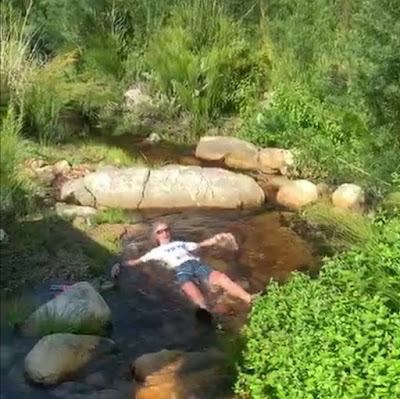 Ok we could really break that into 2 climbs the first 3km long with the middle km climbing 100+m (the other 2 not so bad). Then after a 1km flattish the next 6 climbed 550m.

I was slogging it out km after km, just to scared to walk for fear of never getting going again.

I rounded a corner and saw a water table, the top I hoped, but while I filled my water bottle the guys told me: only 1km to a turn, then 2km to the top… (only, they said, I had just climbed for the last 3km and that "only" would haunted all the way up).

I tried to keep running but the road wasn't really the running type, it called for low-range… 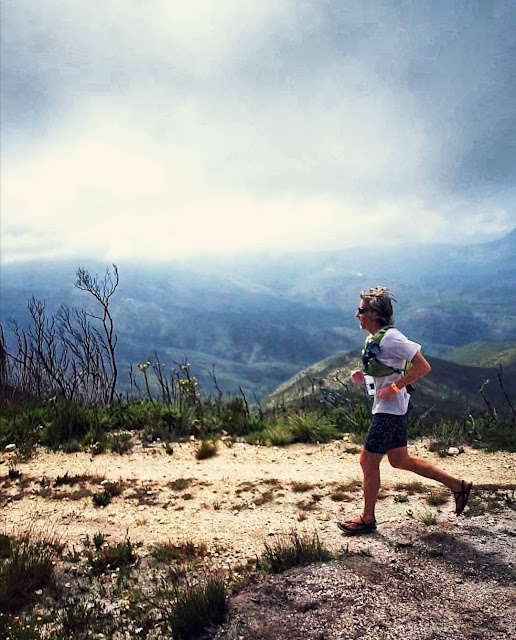 This wasn't the time to be stupid so I didn't drop the hammer and run past, no I just kept my walking pace strong and passed him as he stopped to stretch out another cramp.

The top, the top and the last water table… My water was almost finished, but with only 4+km of mostly downhill I hoped it would be enough I didn't have time to stop.

Flat isn't down and my legs had had enough the running time was over 3 hours and I wasn't really trained for this. I wasn't dropping fast enough and running fast enough, and I don't know if he had control of the cramps and was now catching…

After 2km I could see the farm and finish, but there was still a mountain to descend!

Then, there in my path was a puff adder! And not there, it was right under me… Oh my sandals, I had to put in an unplanned jump… or step on a fat little puff adder!

Jump it was, (not the first time I've had to take evasive actions for a little or not so little snake in my path, but normally not 3h30 into a race when the legs are wobbly !) I made the landing, but not without a tweek of a cramp… OH dear after 3h30 of running smoothly controlled running had I just thrown my race away!

Wait it was under control 2.5km to go and 250m descent left, (oh the last 1km is almost flat) if I ran slowly and carefully…

Before I go, let me say this: I hope I get to return here next year, we have had an amazing weekend, long weekend, and next year, we'll make it longer… (the weekend that is!)

Thank you for reading