OLD GOAT AND THE MOUNTAIN

Yes, I run a lot of races, but I don't race very often. It is easy for me at line up at a race and just run. I can even run a good time, place as a 40+, I sometimes see the competition ahead of me and set about running them down. (my competitive nature) For a road race I'll do the maths and set out at the pace needed for the time I believe I can run. On the trail I start off within myself and set about running people down.
I don't have the confidence to set out 'balls to the wall' and see what the body can do... In a bygone era I would 'attack' a 10km race and be hurting by 3km, hoping that the body would respond to what I was trying to put it through.
With that said I will tell you I was nervous about this mornings race, as much as I had told my athletes (those whom had asked) that I just wanted to run a better time than last year, I knew differently! I was feeling the pressure of being "the Mountain Goat" and wanting to live up to my reputation of been a good hill runner.
The race in question is the Mast Challenge, simply put 10.3km half gravel and half tar with 760m climb... 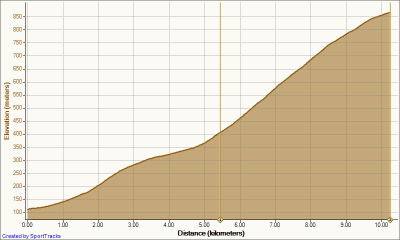 From the gun (Trevor's count down) I took the lead and tried to break the field, and that I did... By 1km only Nicholas and Ian were with me. By 2km Nic had dropped off the pace and I was now plotting on how to break Ian. At 3.5km the race flattens for a bit and Ian had no plans on been dropped and pulled ahead of me. In fact I was so slow I was also caught from behind by a guy from the New Balance club. I feel sorry for this guy as I don't think he had any idea as to what lay ahead...
The gravel turned to tar at 5.5km and I was alone in 2nd place. I could still see Ian up ahead and in my mind I thought I could catch him, but as the road got steeper my legs got heavier and I couldn't chase anymore. Up till then the wind wasn't really a factor, but all that changed the higher we got. Then my race for glory started to fall to pieces and with 2.5km to go Darren caught and past me. In the wind and I couldn't even tuck in and stay with him.
I didn't lie down and die, I fought on, with only the clock to race I turned the last corner and powered up the last 300m to the end. (Why didn't I have this power earlier.) 49:58, at least I had beaten the clock.
Mr. Garmin was so kind as to take my splits: 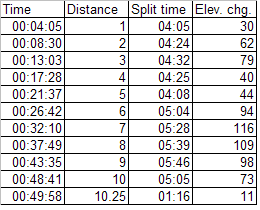 I was a minute faster than last year, so I was happy with my run even if I did wish I had beaten the others. Dawn, my wife, was racing this for the first time, so I ran down to meet her and run in with her. She just wanted to make it to the end, and was happy with her time of 76:15.
I'll look for picture later in the week and post them (that's if you want to see them.)