Last year a friend of mine arrived at the club with a pair of New Balance Minimus MT10 and after seeing them I wanted a pair...

Now unlike the rest of the world who might just go out and buy a pair I wanted to win a pair. Yes I'm cheap, but I also knew that New Balance sponsor a number of races and there are always shoes to be won!!!


So I ran a half marathon sponsored by them, with 5 pairs up for grabs I had a chance... but no luck (there were about 2000 runner.) Next up I headed to one of the New Balance Trail Races, now having run myself into the ground at the half on the weekend I had no speed at the Wednesday race (don't know if it would have help) so no win for me.

I was thinking I would have to wait a month for the next trail race and be ready for it this time... but with the end of the year came the club party! And yes our club is sponsored by, along with ACSIS, New Balance!!! So what does this mean? Give aways, yes, 3 prizes for the evening. So with everybody sitting down they told us to look under our chair, and can you handle it I found a ticket, and the prize, you guessed it; I pair of New Balance shoes!!!

That happened on a Friday Night, well that Saturday I was at the shop... AAAAAAH no stock, nothing, come back in January...

Guess what? It's January...

OK I don't normally do this, but since this shoe is so light I just had to get out Dawn's kitchen scale and start weighing... 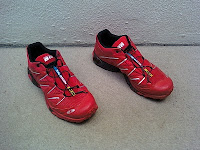 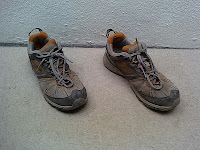 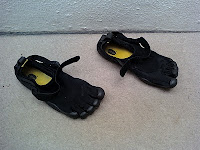 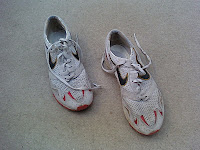 OK so what is the New Balance Minimus Trail Zero, well there are all this new words going around, words like: Barefoot, Minimal, Zero Drop, while all along they are just racing flats. Yes a light weight, zero drop, minimal, barefoot, trail racing flat...

I put them on last night and took them for a 'spin', a 5km warm up and 12 x fast slow 200's. Wanted to get the feel of them before I take them on the trail. I read a lot of write ups on the shoe and to be honest I don't really like the way these so-called barefoot junkies talk. The way it's all or nothing, if a shoe can't role into a ball and doesn't have a zero drop it's no good... well let me tell you the truth:

It's good to get out and run barefoot sometimes, it's also good to run hills and intervals. So what about shoes: If a shoe works, keep using it, if it looks nice buy it, if it works for you it's the right shoe!!! Everyone is different... Now the shoe in question, The New Balance Minimus MT00, well I had no problems, I like the way a "zero drop" shoe runs, and on the warm up (tar pavement) it has a similar feeling to my 5 fingers (maybe like 5 fingers on grass). On the track, an old grass track they were great the grip was amazing, and with them being so light it was almost like running in spikes.

I can't tell you any more about the shoe, but when I take them up the mountain and run in them like a real trail shoe I'll let you know if they are any good as a trail shoe, or will they only work as a cross country shoe? I can tell they'll make a great CC.

Now because I run in 5 fingers and wear flat shoes to work I have no problems running in these shoes, just be warned, if you aren't use to flats this shoe could 'kill' your calves!!!!

Saturday I run the Red Hill 36.2km classic and it should be a fun long training run.
Posted by coach dion at 9:02 AM